I swam the Bournemouth Pier to Pier swim this morning – 1.4 miles in open water, the sun sometimes shining, the sea pretty calm but not completely flat. I surprised myself by really enjoying it!

900 people started with me, and another 1100 were starting two hours later. That’s a huge number to run into the sea all at once. I hung back, knowing I’d be one of the slower ones. I’d buddied up with a friend of a friend who was also expecting to be slow, and we stuck together for the whole swim.

There are 11 groynes to pass, and I counted each one as we swam past the end. The first 3 took ages, then suddenly we were half way, then by the time we got to groyne 10 I felt I could go on forever. But was still thankful to stagger out of the water beside Boscombe pier. My finishing time was around one hour – but it was about the taking part and the sponsorship more than the timings. The fastest people did it in around 30 minutes, but there were still some stragglers coming in after 90 minutes.

Would I do it again? Very possibly, yes. My husband wants to do it – having missed out this year due to his broken hip and wrist, from a cycling accident. So I’ll do it again with him. As long as it doesn’t clash with the RNA conference which I have promised myself I’ll go to next year!

No photos, sorry. Was too busy swimming. I did see one swimmer with a camera attached to her head and another on her back. Looked a bit odd. You can see a few photos and a write up over at the Bournemouth Echo website.

Next weekend I am entering the Bournemouth pier to pier swim. This is approximately 1.4 miles of open water swimming, and yes, I’ll be wearing a wetsuit.

I’m raising money for Macmillan cancer support with this swim. I chose them because a friend and work colleague died last week, and I know this charity meant a lot to him, so it seemed a fitting way to remember him. Not entirely sure he was much of a swimmer himself, however!

I’d love it if you could sponsor me – every little helps, and this is a very worthy charity. I know that many of my blog readers will have been touched by cancer in one way or another.

Here’s the link to my JustGiving page https://www.justgiving.com/Kathleen-McGurl/  and here’s a gratuitous photo of me looking hideous in a wetsuit. 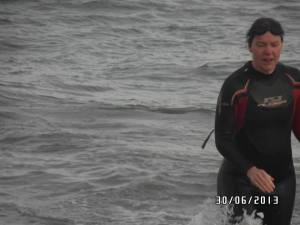