Yesterday was publication day for my second Carina UK novel, The Pearl Locket. It’s been said before, that launch day for a book is a little like the day your son or daughter leaves home to fend for themselves. You’ve done your job as author, bringing your book-baby into the world, and you can do no more. Now it’s time for the book to be released into the big wide world, to sink or swim on its own merits. It’s a scary moment.

And I think it is worse this time round. With my self-published books, I thought that if I sold a couple of hundred copies that would be ok, I’d be happy. My first Carina book was exciting, but I still counted as a new author to most readers, and so there was nothing I had to live up to.

But (thankfully!) The Emerald Comb did well, and now I have readers who were eagerly awaiting my next book. I have been battling a confidence crisis for the last few weeks. What if they all hate the new book? What if I disappoint them? I know plenty of other writers – enough to understand that this is a perfectly normal reaction to publication of book 2. I have been trying to step outside of myself and say (as I have said to others in the past), “don’t be daft. It’s a good book – some people will love it, some might not, but you can never please everyone. Now off you go, promote it a little, and get on with writing the next one.”

So, that’s what I am doing. Getting on with the next one, that is. I am DELIGHTED to say that Carina have offered me a second two-book deal, which means I really DO need to get on with writing the next book!

I’m delighted to present the cover for my forthcoming timeslip novel, The Emerald Comb. This is to be published as an ebook by Carina UK on 22nd September. Eek, that’s about three weeks away! 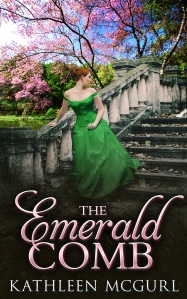 ure, isn’t it?  And here’s the blurb for the book:

One afternoon, Katie takes a drive to visit Kingsley House, the family home of her ancestors, the St Clairs. She falls in love the minute she sees it. It may be old and in desperate need of modernisation, but it is her link to the past and, having researched her family tree extensively, she feels a sense of belonging to the crumbling old estate.

When it suddenly comes up for sale, she cannot resist persuading her family to sell up and buy it, never telling them the truth of their connection with it. But soon the past collides with the present, as the house begins to reveal the secrets it has hidden for generations. Does Katie really want to discover what she has come from?

I can’t wait for this to be published – my first full-length novel. It’s all becoming very exciting as the publication date draws near!

The first chapter of a novel is so important – it’s the first thing a reader, editor or agent sees, and if they don’t like it they won’t read on. And these days with Amazon offering the Look Inside feature, potential readers can read the start of your book from the comfort of their armchair. Get it wrong and it’s all they’ll ever read. Get it right and you’ll make a sale.

One of my novels has had so many first chapters it’s amazing it knows its own identity. For your amusement, here’s its history, to date. What I needed to happen in the first chapter was for amateur genealogist Katie to visit a house where her ancestors used to live, get a look inside, and have the current owners hint to her at mysteries in its past. In chapter 2 the historical part of the story begins; from then on the chapters alternate between current day and historical.

Katie arrives at the house, knocks on the door, chats to the owners and they show her round and hint at mysteries in the house’s past.

I read this version out to my writing group, and the feedback was that it was all too easy for her, there was no conflict. So…

Katie arrives at the house, knocks on the door but there’s no answer. She sneaks round the back to peer in windows, gets caught in the act by the current owners who threaten to call the police etc. She explains why she’s there, then they get interested, show her round inside and hint at mysteries in the house’s past.

I sent this version to a literary critique agency. The feedback was that it was all very well, but a central theme of the novel was conflict between Katie and her husband (who doesn’t get why she’s so fascinated by the past) and that I should show that conflict in chapter one.

Also, this version was discussed in depth by a group of fellow writers at a novelists’ conference, and they came up with the marvellous suggestion of taking the start of chapter 2 (which is the first historical chapter) and turning it into a prologue to give the novel a proper hook.

New prologue – a couple of pages in the form of a letter, providing a definite hook and hinting at a mystery connected with the house.

Chapter One begins with a new opening scene where Katie reminds her husband she’s off to look at the old house, and he needs to look after the kids. They have a row, and their conflicting views are shown. Katie storms out and goes to the house, then it continues as version 2.

I sent this version to an agent with whom I had a one-to-one at the Winchester writers’ conference last year. He liked the novel and wanted to see the whole thing, but asked me to change the first chapter. ‘Don’t start with a domestic,’ he said. ‘I get enough of that at home.’ So….

I rewrote the beginning, so that after the prologue it starts with Katie in the car on the way to the house, musing on the row she’d had with her husband and wondering if he’ll ever understand her obsession. She arrives at the house, then it continues as version 2.

Sadly the agent didn’t take me on. I then submitted this version to publisher Carina UK, and they’ve offered me a two-book deal! Which I am very, very excited about! But it is highly likely my editor (oh, how I enjoy saying my editor!) will want some changes, so…

You’ll have to wait until it’s published, and buy the book to find out!

But it all goes to show – often you’ll work harder on the beginning of a novel than on any other part. It can be the most difficult bit to get right. Remember, you don’t have to get it right first time. The point of the first draft of the first chapter is to get you up and running, into the story. Just write, even if you know it’s not a good opening, and keep writing. When you’ve reached the end, you can come back and rework that beginning, as many times as you need to, until you’ve got something which grabs readers and doesn’t let them go.