A few years ago I began researching my family tree. The 1911 census had just been published online, and one evening I idly wondered whether I could find my grandfather, Cyril Methold who I knew was born and grew up in Worthing, on the census. I found him immediately – Methold is a wonderful unusual name.

Then I began tracing the Metholds backwards, until I reached the 1841 and 1851 censuses and one Henry Methold who lived in a seafront property in Worthing with his servants and children. No wife. Was she absent for both censuses? Looking more closely at the 1861 census, the children were listed along with their mother, Jemima Methold; Henry had died by then. And on the 1841 and 1851 censuses, there was a servant, Jemima Twine, listed. Was she the mother of Henry’s children, all 13 of them? It turned out that yes, she was, and Henry’s will made careful provision for her and the children.

I was immediately hooked, and had to find out more. Henry had married a woman named Caroline Clarke, but the marriage had broken up within a few years, before Henry got together with Jemima. I traced Henry’s roots to Durham – he was the grandson of a baronet, Sir john Eden. His younger brother inherited Beamish Hall, now a country house hotel. Why hadn’t Henry inherited it? I found Henry’s uncle’s will – the one which named Henry’s brother. It also named Henry’s other brother and sister, but my poor ancestor was conspicuous by his absence. What had he done to upset the family?

Beamish Hall, where Henry was born.

Born into aristocracy, Henry lived his life firmly in the middle classes, but his children all ended up as lowly grocers, clerks or butcher’s wives.

When I could no longer find out anything more, I decided to do what writers do, and make the rest of it up. So I wrote a novel, using the facts I’d found as the framework, and filled in the blanks with fiction. My rule was that the made-up stuff had to be possible – it might have happened like that. It had to fit with the facts I knew.

You know the saying, don’t let the truth get in the way of a good story? Well, it did get in the way for me, and I ended up with a novel which has some good bits but overall does not work as a piece of fiction. The structure and story arc aren’t right, and the novel is not commercial.

However, my aim in writing it was simply to prove to myself I could do it – that I could write and edit a full length novel. Which I did, and I enjoyed the process, and it inspired me to write another, purely fictional one – The Emerald Comb. And I’ve not stopped writing novels since.

I also rewrote the middle section of the novel – the Henry/Jemima/Caroline love triangle – as a romantic novella and self-published it as Mr Cavell’s Diamond. Surnames changed as I was moving away from reality and into fiction.

But after writing my original Henry Methold novel, I found out yet more of the story. My second-cousin-twice-removed (also descended from Henry and Jemima) sent me the following newspaper report from 1836. Truth can indeed be stranger than fiction!

A gentleman, whose name is Methold, residing at the west end of Worthing, some time ago separated from his wife, since which time the lady has been residing at Brighton and other places. On Thursday last she arrived at Worthing, attended by a French female servant and a gentleman, who represented himself as her solicitor. No movement was made until Saturday at noon when the servant contrived to effect an entrance into Mr Methold’s house, and after a struggle with the females of his establishment, she succeeded in admitting her mistress. By this time a considerable number of persons were congregated round the house. Mrs Methold took possession of the front sitting room upstairs and was there attended by her female servant, and occasionally appeared on the balcony, addressing the assembled people in the street. In the mean time Mr Methold went to consult his solicitor; and shortly after the headboroughs, attended by the solicitors and others, entered the house, and by forcible means ejected the lady’s female attendant. The legal gentleman by whom Mrs Methold was accompanied to Worthing waited outside and directed her operations. Things remained in this state until about 10 o’clock at night, when the lady appeared at the drawing room window and called for assistance. Arrangements appeared to have been made to answer the call for it was no sooner heard than a ladder was placed against the window, through which Mrs Methold’s legal adviser entered the room, followed by more than a dozen other persons. The parties having the care of the house hearing the noise upstairs, went up to the lady’s room, where they found the legal adviser heading his party, poker in hand. The intruders then made a desperate attack on those in possession, and, driving them out of the house, kept possession for the night. About 1 o’clock Mr Methold’s party broke open a door at the back part of the premises, on which a scene ensued which surpasses our powers of description. There could not be less than a hundred persons present in the small yard, where a violent scuffle took place, which ended in the assailants being repulsed. On Sunday afternoon the high constable and headboroughs having, in the meanwhile, been armed with warrants, proceeded to the house, and after breaking open several doors succeeded in taking into custody the professional gentleman, and two other persons named Holden and Charman, and lodged them all three in the black-hole, the others implicated in the riot having for the moment contrived to elude the vigilance of the officers. On the following day the parties were ordered to find sureties for their appearance at the session. 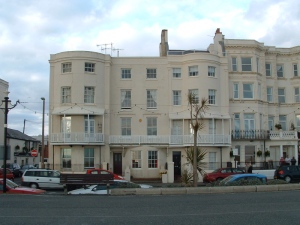 Henry Methold’s house is the middle one of these three. You can see the balcony where his mad estranged wife addressed the gathered crowds.